String of Hearts Plant: Ultimate Guide in Planting and Care 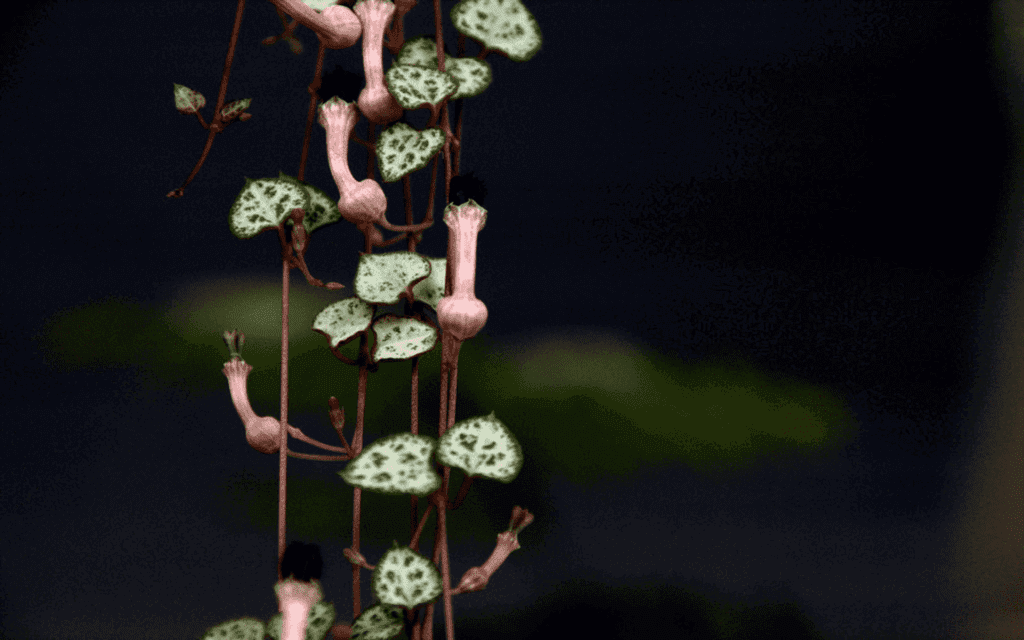 How to Take Good Care of String of Hearts Plant

Its name String of Hearts is very descriptive of the plant’s appearance. While it may not be the most colorful succulent you can plant at home, it does have some very distinct features which make it an attractive companion to many other houseplants. It’s got leaves which resemble hearts (no anatomically correct ones, for all you doctors out there), which are attached to these droopy string-like vines, which dangle in a curtain-like fashion.

When hung in a shady enough spot, such as under the roofing of a porch or on the windowsill, these plants can become quite mesmerizing. The String of Hearts is a succulent that’s native to South Africa, where it is often planted in hanging pots or in areas of the garden with enough shade.

Originally collected in 19th century in South Africa, the String of Hearts could be found within that region, including in Zimbabwe. They were found there drooped on rocks in the wild. Upon collecting it officially for the first time in history, botanist John Medly Wood noticed how easily it could be planted in hanging pots and loop it around plant frames.

And since the plant did not require constant direct sunlight, it was great as an indoor plant to hang in the deeper reaches of rooms, where it could still get some indirect rays, but also have enough shade.

Now that you have a few vines and trimmings, you can put them into some water for a traditional water-based propagation. You will then put the water in an area that gets a good amount of sunlight, but not to the point where it’s too hot. In general, during propagation and as the plant grows, remember to avoid putting the plant under hot conditions. Basically, think of the plant as yourself: sure, you want some rays from time to time, but is getting sunburned a fun experience? Of course not. 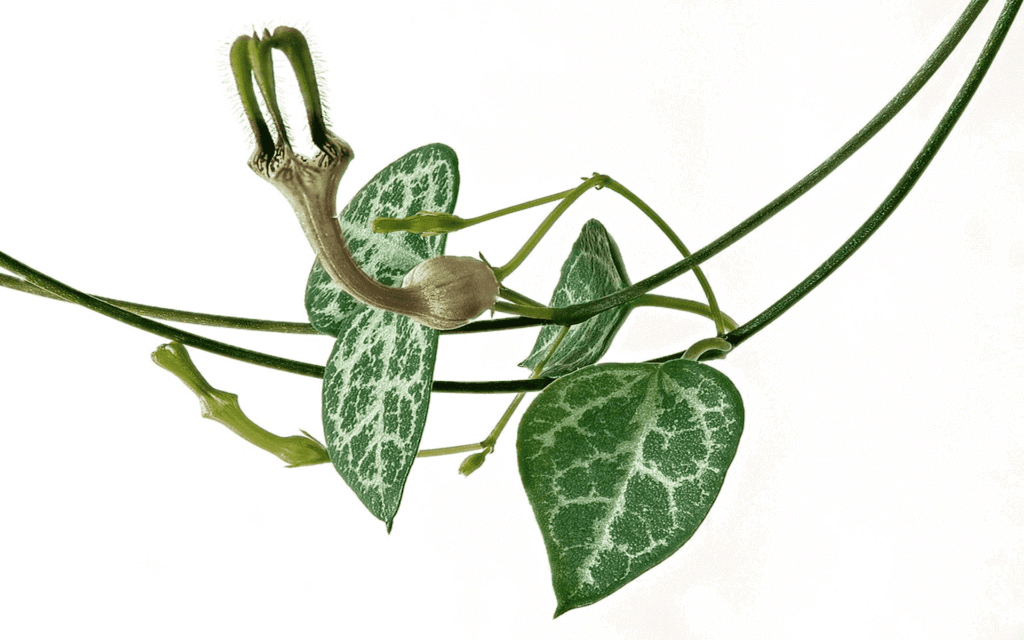 Alternatively, you can place the trimmings on a bed of moss or soil, put it inside some kind of container which allows for air circulation, spray with water, and put under some light to propagate. And if you can up the vines at both ends, you can end up with even more rootlets, but with the same number of vines.

It will take several weeks for the roots to come out of the ends of the trimmings. Give it some time to properly grow, make sure to give it enough sun and water, but not too much of either, since you can burn or rot the leaves. 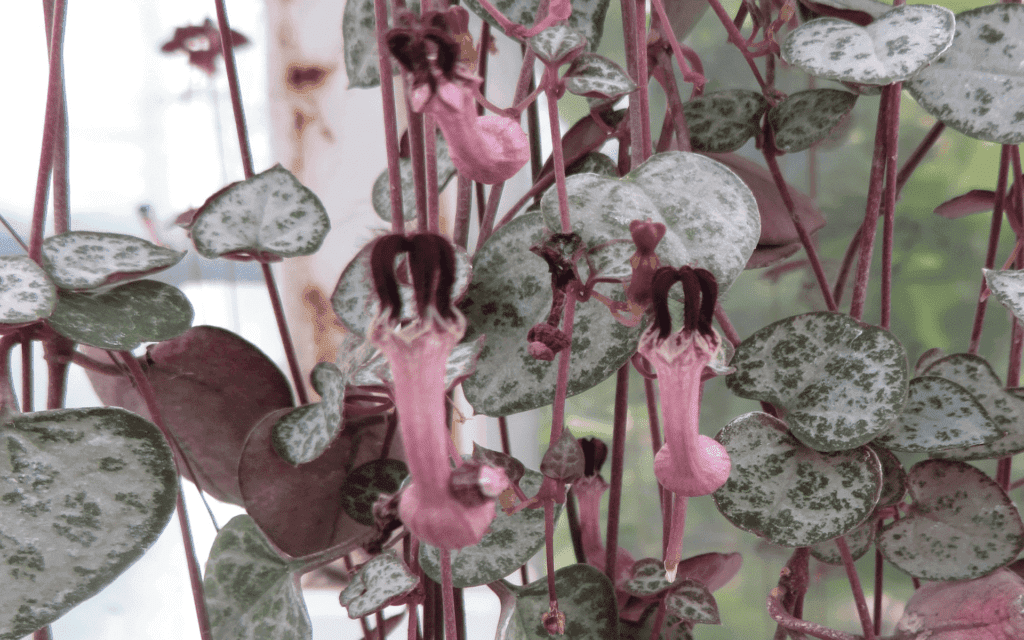 After the three weeks, you’ll see the small rootlets poking out at the ends of each cut node. This means that it’s time to plant and get your hands dirty (pun very much intended).

Once a rootlet has properly shown itself and is long enough, you’ll need to plant it in soil. Use the same kind of soil you’d use for any other succulent or cactus (it’s conveniently named succulent or cactus mix soil, so it’s really hard to mess up). When planted, leave the vessel in an area that gets sufficiently bright during the day, but again, don’t leave it under direct sunlight, as the heat could damage and burn the leaves.

If your growing it indoors, make sure it gets enough bright indoor light. This usually means that it needs to be near a window, but not directly under it. You can move it as close as you think it can possibly handle. This means that it doesn’t have to be directly under the window, but you can tell that it’s getting enough rays just by how much light reaches its area.

In regard to growing it outside, however, much like our 19th century precursors did, put it under shade on your porch or near a window, but away from strong, direct sunlight. But something you have to keep in mind if you’re growing your String of Hearts outside, is that the temperature has to be above 60 degrees Fahrenheit, which is around 15 degrees Celsius, otherwise it’s not going to grow very much and may die out. 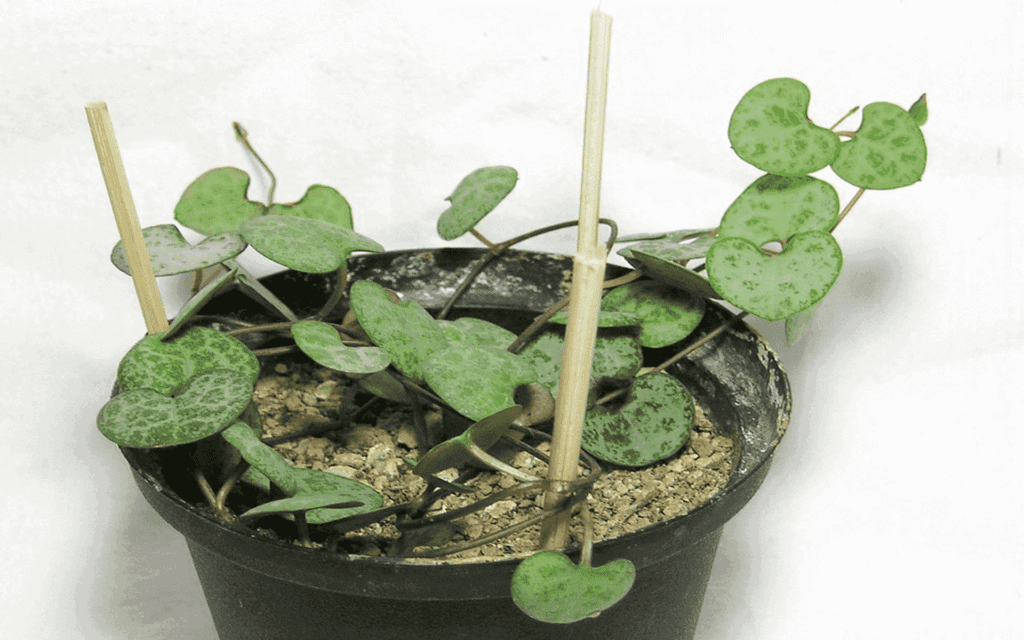 Also, if you have a pot that’s been growing inside and is used to the indirect light that it gets from having it reflect off a wall or curtain, it’s not going to handle sunlight as well if it’s taken outside. So if you’re planning on moving your indoor String of Hearts and taking it outside, you need to gradually let it get used to more direct heat and rays, by slowly bringing it closer to the window day by day. Think of it as training wheels. Your parents probably didn’t force you to ride a Tour de France class bike when you were starting out, as that would’ve been disastrous.

So, take it slowly, don’t rush the growth process and make sure you’re constantly aware of how much sunlight is coming its way. Again, you don’t want to keep in complete darkness, nor should be making a String of Hearts omelet.

First rule: do not overwater this plant. Ever. The easiest way to rot a String of Hearts is to give it too much water. In fact, it’s better to give it very sparse quantities of water and get it a little dry, than to keep it constantly moist or worse, submerged in water. Just give a little moisture to the soil and then give the plant a good amount of it, before leaving it to dry for days, even weeks. These plants have been known to survive for weeks on end without any watering and still retain a healthy and stable appearance. So, the only way you can go wrong with String of Heart maintenance is to drown the thing in water. Simple: just don’t do that.

As far as pruning goes, all you really need to do is to cut off the dead leaves and stems, which are easily discernable from the healthy parts of the plant. Honestly, very little to mess up in this area as well, unless you really don’t like paying attention to your houseplants, in which case you probably shouldn’t be looking to plant new ones, but rather to work on the ones you already have planted. 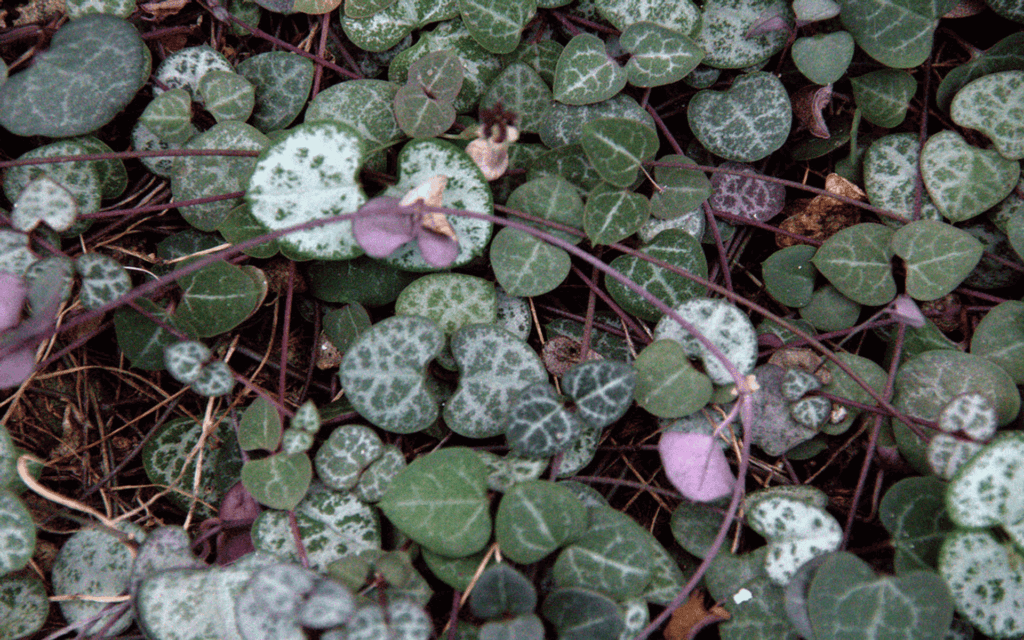 Also, the plant requires reporting very rarely, about once every 2 years if the pot’s big, or a year to 18 months if the pot’s a bit smaller. You typically want to repot it into a slightly bigger vessel, as the String of Hearts will have grown much bigger at that point and you don’t want to cram it in there. However, you should be giving the plant a little fertilizer ever half a year to one year, so that it has all the proper nutrition to continue its growth.

Now, it’s vines, while looking very nice, can grow up to 12 inches, which can cause a certain number of complications. If you leave it outside, the wind can tangle up the long vines, causing a huge mess and a lot of ugly knots, which make the plant look unkempt. Make sure to untangle them often or protect it from the wind entirely. The whole untangling process can be some real messy work, considering how the plant’s vines are pretty sensitive, so you can easily rip it apart as your untying the knots. 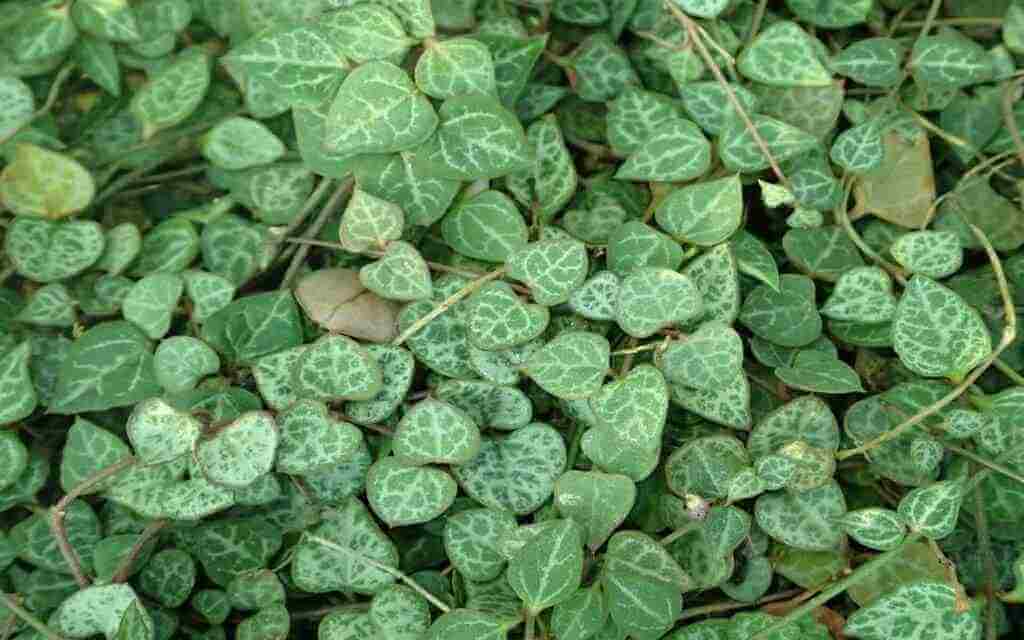 If you’re keeping the plant indoors, as with anything else that’s sensitive and easy to ruin, keep it far away from your pets, especially cats, who love to play with anything that dangles. I’ve had personally encounters with cats who love to ruin anything you put a lot of hard work and sweat into, and the String of Hearts is no exception. They jump and try to catch the vines, rip off the leaves, knock down the plant entirely. So, if you have a pet, especially a cat, keep it out of their reach. Other than big furry animals, the only other pests are mealybugs, but they’re very easy to spot and get rid of while dusting the plant.

And don’t think that you can protect your plant by putting it up somewhere high. You’ve seen how high cats can jumps and they’ll happily accept the challenge to scale a bookshelf or a cupboard to get there. Also, if you like keeping your plants near your bed, avoid doing that with the String of Hearts. You don’t want the vines touching you at night while you’re sleeping, giving you nightmares of a huge spider crawling up on you. You might think it’s funny now but wait until you experience it yourself. 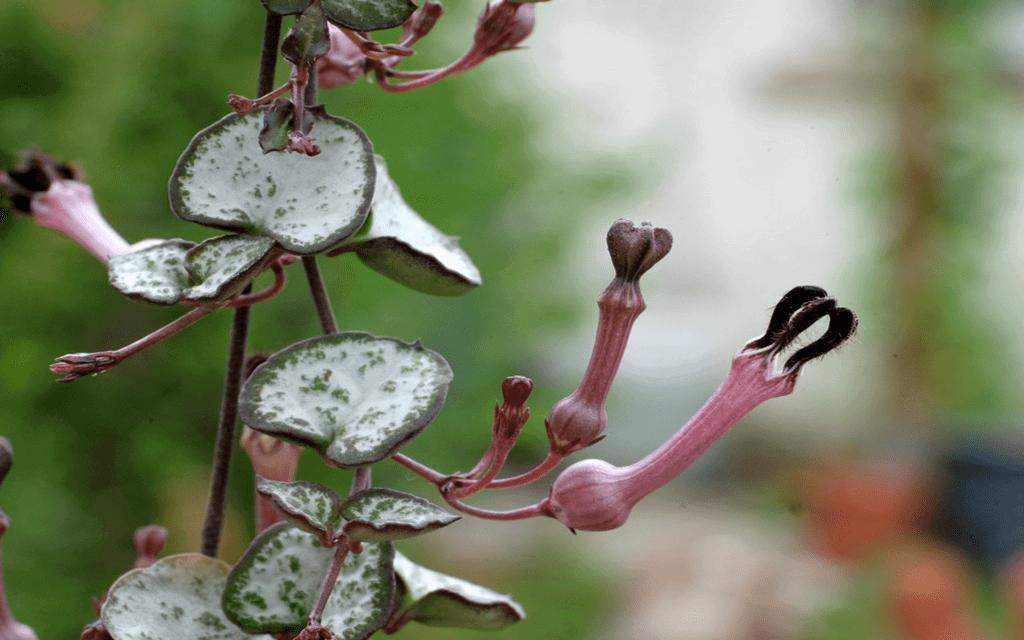 You can get your hand son two different variants of the String of Hearts plant which you’ll probably find: the standard or variegated. While they look a little different from one another, they’re actually the same plant in terms of maintenance and care. So, their only difference is exclusively in their appearance.

Otherwise, the two cultivars act, propagate and grow the same way, so you won’t have to worry about giving each of your plant’s extra special care since they’re all pretty much the same. This is actually a great plant for lady gardeners, who 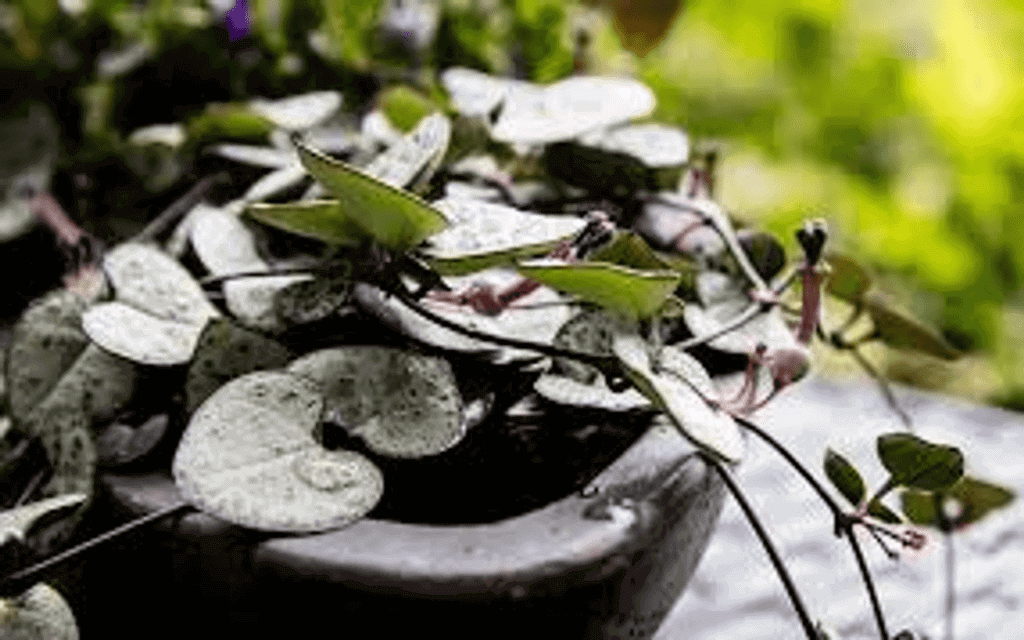 A string of hearts, regardless of the cultivates, is a very casual and low-key plant to take care of. They don’t require much maintenance, fertilizer, even water. You won’t have to get special tools, equipment, or pots for them and best of all, even in tough conditions, they’re a great addition to any room, garden, patio, or porch.

Their beautiful green leaves with the white accent give off very naturally faded colors, which don’t overpower the senses, making them great plants to keep in your study. And if you can find enough room for their long vines, you can decorate any room with a little more wilderness. Thanks to the low-maintenance requirements, as well as the versatile and durable nature of the plant, you can enjoy growing the String of Hearts, without all the hassle and extra care.