Intense Heat Lawn Management: How to Keep Your Lawn Healthy in Extreme Heat

How to Use Grow Bags in Gardening – The Ultimate Guide

Do you want your Split Rock succulent to thrive?

Follow these failsafe guidelines to help it grow and flourish

The way its gray-green or brown leaves grow makes it look exactly like a rock that’s been cut or split in half. As the plant’s new leaves grow, they rise straight up from the Split, and a new pair of leaves replace the old ones each year.

The Split Rock is a true succulent in that it rarely needs watering and usually requires no water in the winter. Depending on where you live and where you grow it, of course. If your winters look like someone else’s summer, check if your Split Rock needs watering. It probably does.

The green varieties of Pleiospilos Nelii have orange-colored flowers, while Royal Flush Split Rock varieties make purple flowers. Both flowers have white centers, many petals and resemble popular daisies. The Split Rock succulent flowers have a blooming period of only a few days. During this time, they open up during the day and close up at sunset. Their blooming period is usually in spring but can sometimes also occur in the summer or fall. 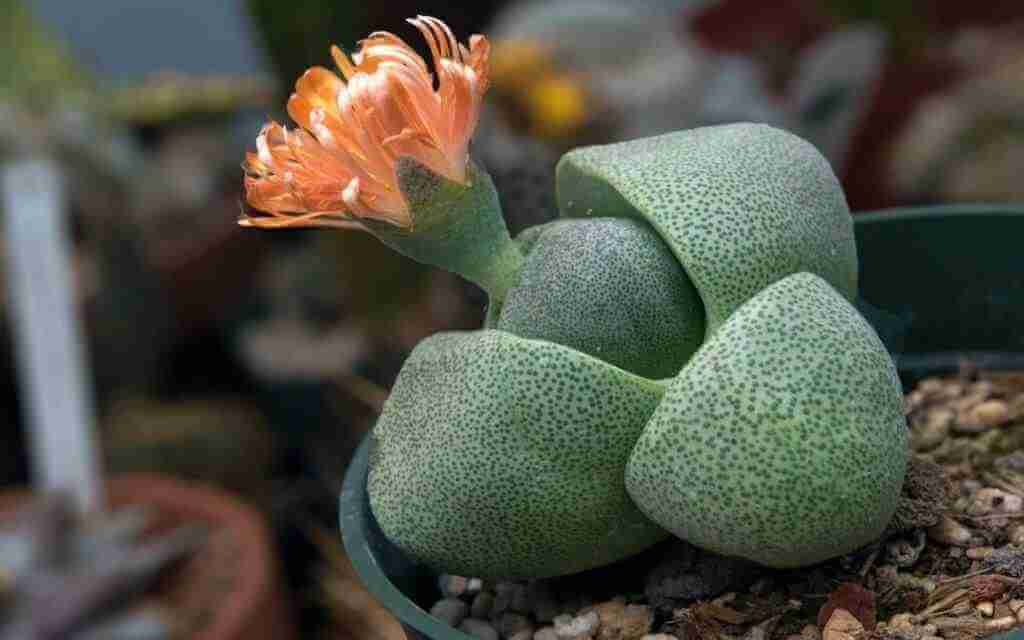 The Pleiospilos Nelii’s natural habitat runs from Little Karoo—a semi-desert region of South Africa on the Eastern and Western Cape provinces border to the Southern parts of the Great Karoo region in the Northern Cape province.

The Split Rock succulent naturally thrives in sunny areas such as these, with soil made up of shale and sandstone and little to no rainfall. The average rainfall in these areas is between 150 and 300 mm rain per annum.

The Pleiospilos Nelii’s name derives from two Greek words, ‘pleios’ meaning full or many, and ‘spilos,’ meaning spots. Thus, the name references the plant’s spotty appearance. Its common name of Split Rock also references its appearance but focuses more on its similarity to a rock cracked in half. This feature allows the plant to blend into its natural environment and protects it from animals.

Insects pollinate the Pleiospilos Nelii, and the plant releases tiny seeds from its woody capsules that open up when they get wet.

The Split Rock succulent is not fond of cold temperatures. Instead, it prefers full or partial sun and mild temperatures.
The lowest temperatures it can survive well in are around 40°F. So plant your Pleiospilos Nelii in a pot rather than outside if your area has temperatures below that mark. This way, even if you keep it out, you’ll be able to move the plant indoors during winter, when temperatures drop. This method will keep the plant safe and healthy. 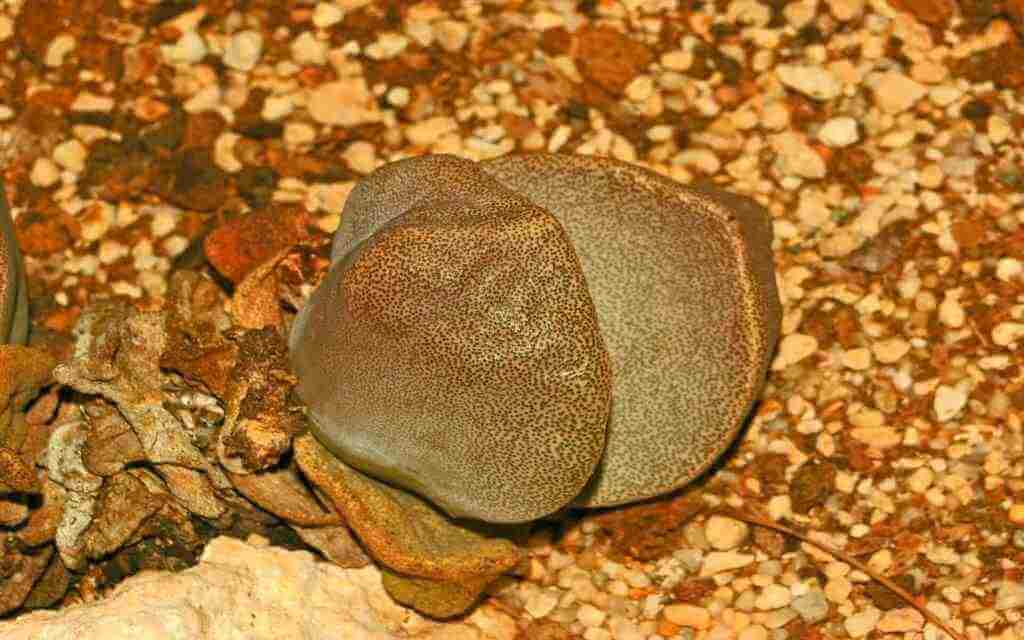 Being a true succulent, the Split Rock is ideal if forgetting to water your plants is something you often do. It needs less water than other succulents, which we all know need little water. So, forgetting won’t be a problem.
If you don’t have that problem, beware of over-watering your Pleiospilos Nelii. That is a common problem with this variety of succulents. Only water it when the soil is dry to avoid the plant rotting from too much watering. Check the ground regularly and check the leaves’ hardness to determine if any water is needed.

If the soil is almost dry, but the leaves are solid, you probably don’t have to water it much or even at all. Avoid wetting the Split Rock during the hottest summer days and in the middle of winter for best results, and in the growing season, water the plant when the soil is dry. In early fall, you can increase the amount of water until you entirely stop watering the plant in the winter months. 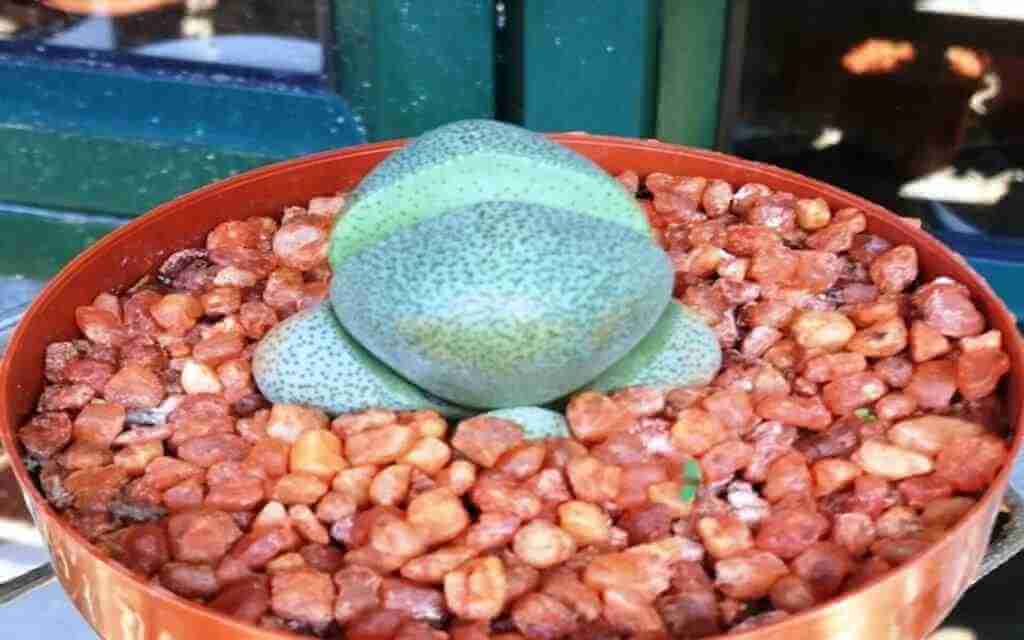 If you move the Split Rock from one pot to another, don’t water it for a few days to a week after the transplantation. It will allow the roots to grow into the new soil. Then, after a week, water it only as needed.
Even though you may be delighted to see over two leaves on your Pleiospilos Nelii, that is most likely a sign that you are over-watering your plant. As a result, you may need to adjust the amount of water you feed the Split Rock and allow it to use up its water reserves.

Believe it or not, the Split Rock succulent does so well without water. It can survive for up to one year in a typical European or North American climate. If you have any doubts, check the center leaves. If they are solid, your plant is fine.

Split Rock succulents like sandy, well-drained soil. After all, they originate from semi-desert areas with pebbles and sandstone, so they need similar conditions to survive anywhere else.
They can be planted in pots and kept in or outside or planted directly outside if the soil and temperatures allow it.
For indoor planting, use a cactus or mineral soil mix. Avoid organic mixes. Try combining one part succulent potting soil and three parts pumice for ideal results. 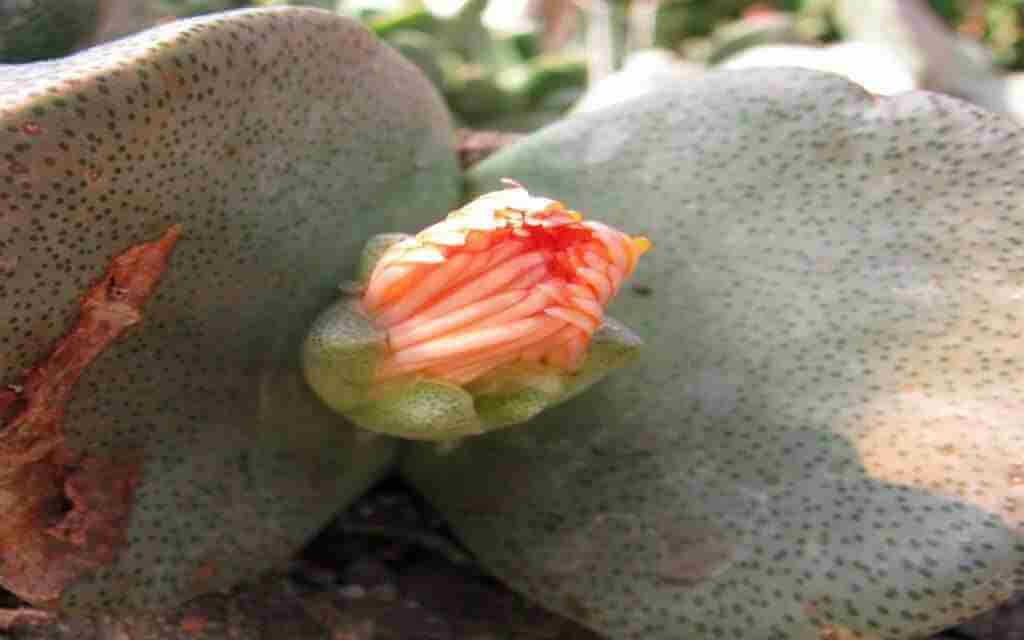 The Pleiospilos Nelii does well in the sun or partial shade. If you keep it indoors, place it on a windowsill or somewhere that allows it to get enough sunlight. If you plant it outside, make sure you protect it from sunburn, freezing temperatures, and rain.

Split Rock propagation can be done through division or by using its seeds, generally in early spring.
Seed propagation requires a bit more gardening skills and more time until you see a full-grown plant. So first, you’ll need patience. The simplest method is to disseminate the Split Rock seeds over sandy soil, keeping them damp and warm with indirect light. Then, you can harvest the seeds from the flower pod or find them online.

If you decide to take on this operation, the Split Rock seeds are best kept in water for a day before placing them in the small layer of sandy soil. It will help make the seed’s outer layer softer. The soil should be kept damp, but not excessively until the seeds finally germinate.

If you plant your Pleiospilos Nelii in a pot, choose one around 4 inches deep to allow proper draining. Add a hole in the bottom of the container for the same reason.
As for soil, choose a cactus mix or a mineral mix, but not an organic one. There is also no need to add any fertilizer, as the plant will take care of itself.

If you plant it outside, ensure the soil and draining conditions are optimal to avoid rot from improper draining or freezing.
You can also add some rocks on the top of the soil (not the bottom) to make the plant feel at home. Since it is called a “Split Rock” and works so hard to resemble one, it will appreciate it. 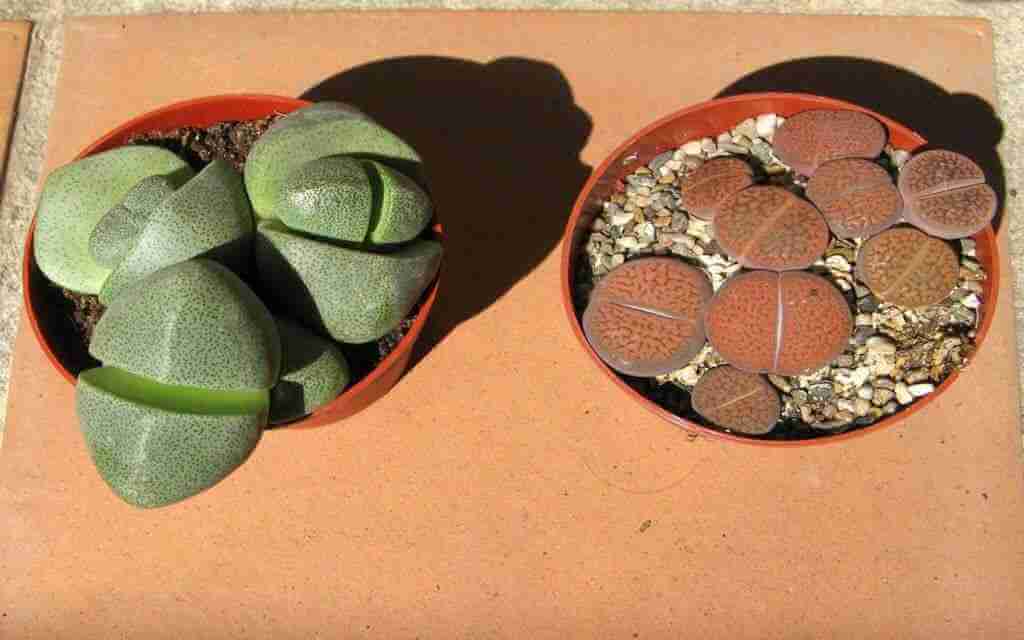 When soil and water conditions are optimal, the Pleiospilos Nelii takes care of its own grooming needs. Your Split Rock succulent will produce two new leaves each year. As the fresh leaves grow, the old ones will wilt away. At first, they will feel soft, and eventually, they will dry up, shrink and disappear.

It is important to remember that if the inner leaves of the plant are solid and firm, the plant is healthy. What you don’t want to see is mushy or gelatin-like leaves. In this case, you will want to adjust the amount of water and check that Split Rock’s environment is fitting to its needs.

As far as maintenance goes, follow the tips above, and your plant will live long and prosper. 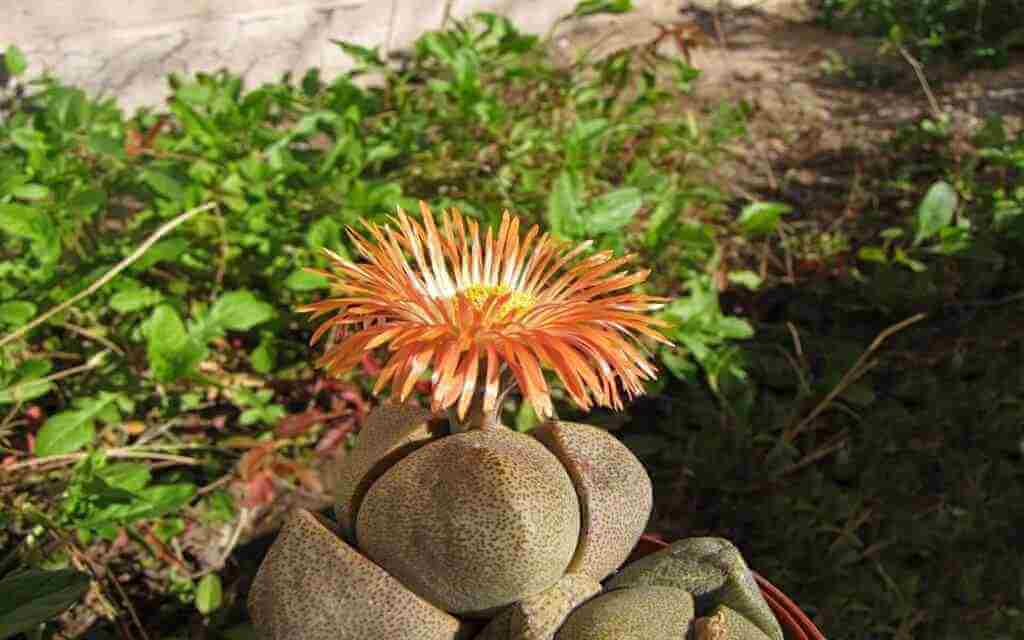 Pleiospilos Nelii should not be confused with Lithops, although they often are. They are, after all, members of the same family – the Mesembryanthemaceae. Mesembs for short. 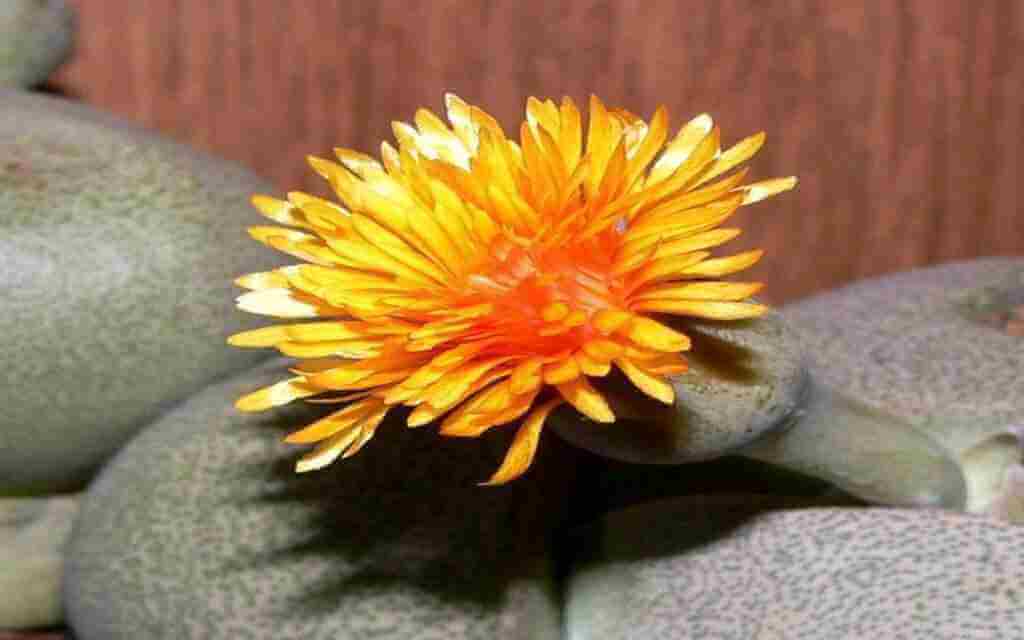 Like all succulents, the Pleiospilos Nelii is self-sufficient and not prone to pest and disease damage.

However, over-watering is a prevalent problem with Split Rock succulents. It can lead to the plant partially or fully rotting. It can also attract damage from pests like aphids and scale.
The Split Rock will grow just fine as long as it is kept in proper conditions, away from the cold, and in well-drained soil. However, if the succulent is outside or sitting in direct sunlight, you will also want to watch out for signs of sunburn. Severe sunburn and overheating can cause the tissue to rot.

It is best to inspect the plant regularly and closely to catch any signs of damage early. That way, you can treat it before any irreparable damage occurs.
Most importantly, keep in mind to constantly water your Split Rock only when the soil is dry. 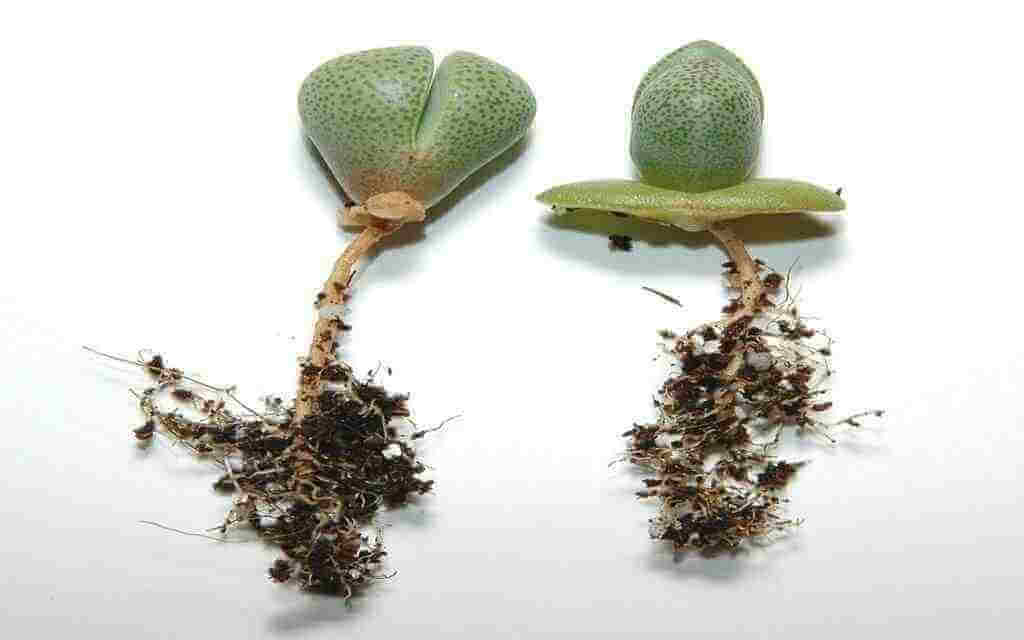 The Split Rock is a great decorative houseplant because it is so low maintenance. If you find the right watering balance, it basically needs no maintenance at all. Especially if it is kept indoors.

Its low maintenance qualities do not make it less eye-catching, though. Succulents in general have very interesting hues and shapes, but the Pleiospilos Nelii with its two leaves and cracked stone look is one of a kind and beautifully unusual.

It does well if paired with other members of the mesemb succulent family, but is generally planted alone. Mostly used as an indoor decorative plant, the Split Rock can also be a great addition to an outdoor succulent or cactus garden. That is if you live in an area with sandy soil and reasonable temperatures.