How to Plant and Care For Your Succulents.

A Comprehensive Guide on Crassula Perforata ‘String of Buttons’: 6 Simple Steps to Grow a Successful Plant. 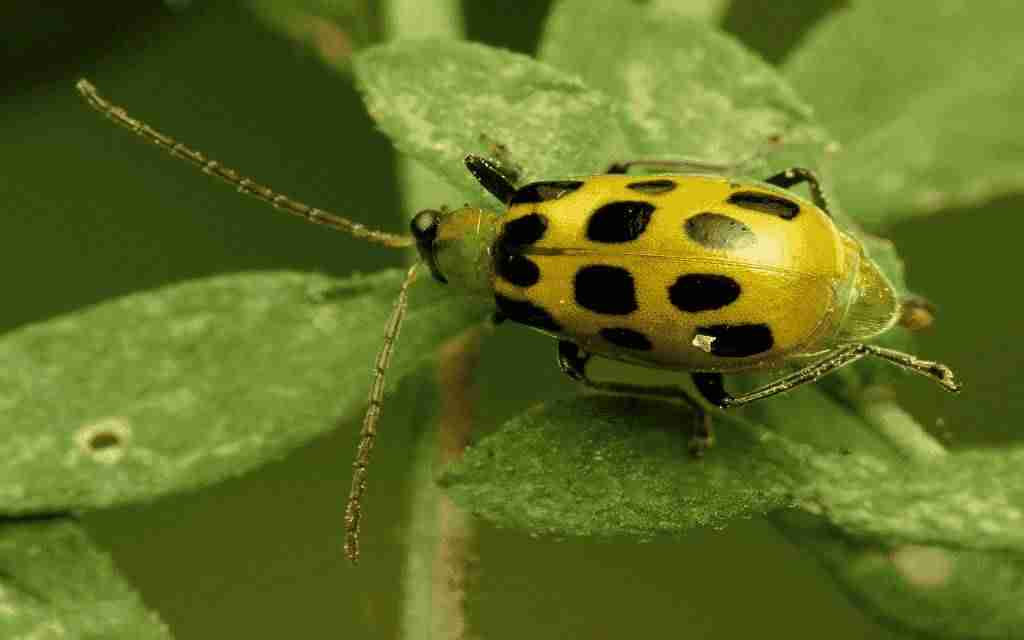 The genera Diabrotica and Acalymma of the family Chrysomelidae are commonly referred to together as “cucumber beetle. Cucumber beetles will eat the leaves of your cucumbers, tomatoes, pumpkins, squash, and more. They lay eggs in the ground near these plants, which hatch into larvae that eat your plants’ roots. Also, they are a big problem for gardeners because they can destroy your plants. If you have this pest in your garden or greenhouse, then here are 12 home remedies for cucumber beetles to try out from experts.

Both spotted, and striped cucumber beetles are a nightmare for gardeners around the country, and they don’t only eat cucumbers, as many of us have discovered the hard way. Pumpkins, Melons, Corn, Squash, and bean plant leaves are their favorite foods. While their eating is inconvenient for the gardener and unsuitable for the plant, it isn’t the most severe threat these pests offer to a yield.

According to some experts, cucumber bugs may consume up to 25% of the leaves without affecting the plant’s fruit output. In actuality, the most severe issue with cucumber beetles is that they carry and spread bacterial wilt disease, which can be fatal to young plants. 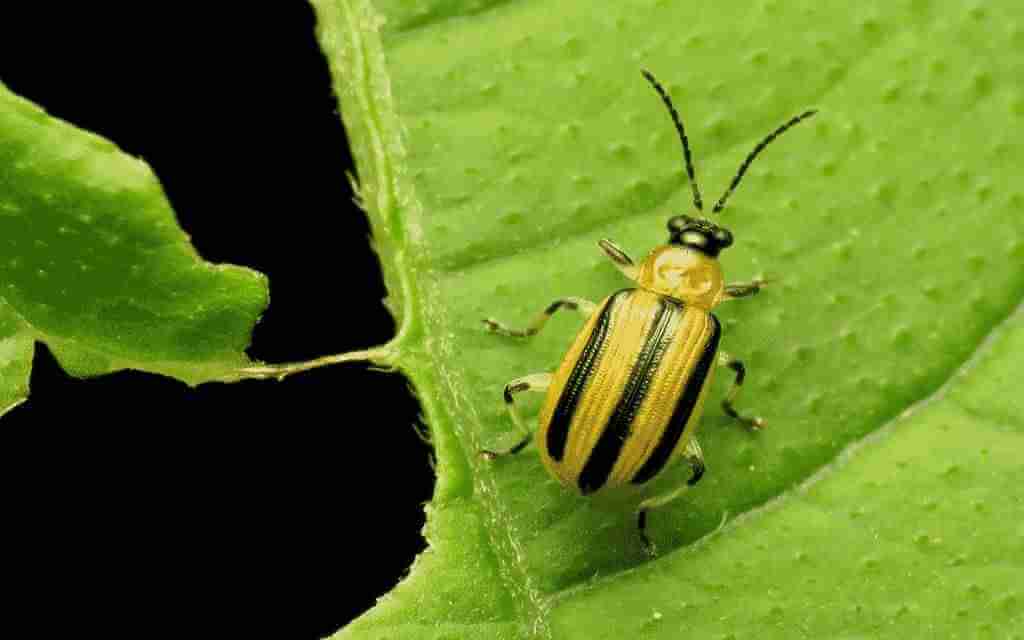 As a result, many of the techniques listed below aim to postpone the virtually unavoidable interaction between plants and insects. Your plants will have a far greater chance of being healthy and productive if they develop for a more extended period without being exposed to the illness. Then, of course, after the beetles have settled on your wonderful cucurbits. 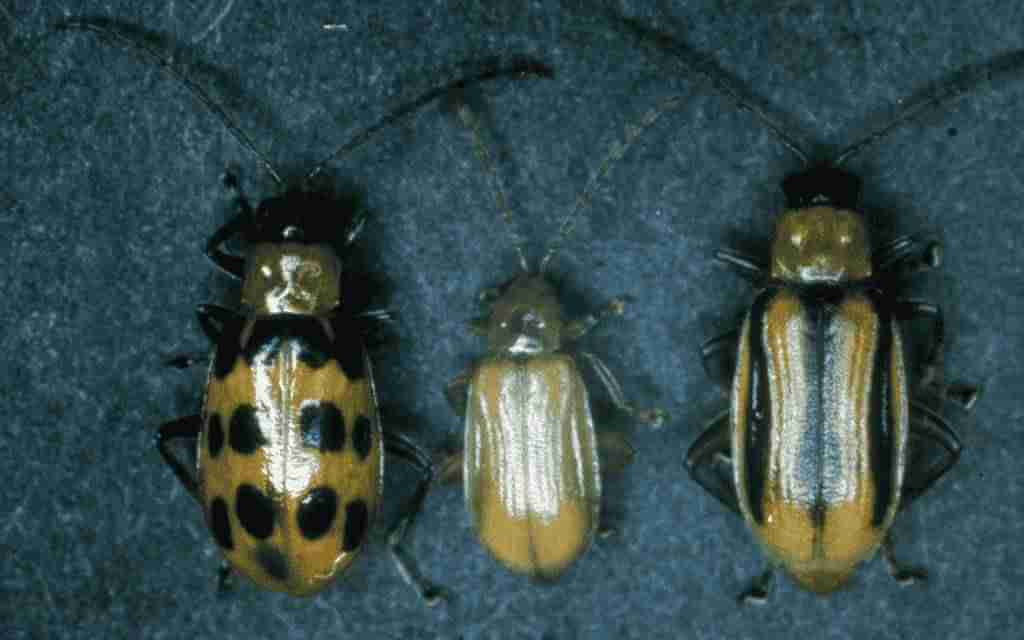 Symptoms and Effects of Infestation.

When present in significant numbers, cucumber beetle larvae can slow or kill seedlings and transplants by feeding on their roots and stems. Adults eat vegetation, flowers, pollen, and fruit. High adult populations can totally defoliate plants, especially those between the cotyledon and three-leaf stages.

Feeding on the leaves of elder plants can cause noticeable defoliation. Cosmetic flaws caused by fruit feeding are not harmful to human health but can diminish the fruit’s value on the market. Cucumber beetles can limit fruit set by inhibiting pollination by bees and by clustering in large numbers in flowers (where they are drawn by substances called cucurbitacin’s generated by the blossoms).

Striped cucumber beetles are the only species that survive the cold northern US winters. At the end of May or the middle of June, adults emerge and begin laying eggs in the soil at the foot of vine plantings. Larvae develop from eggs in 14-21 days and feed on the plant’s roots and subterranean portions. The pupation process for larvae takes place in the soil after the larvae have fed for around two to three weeks.

To avoid difficulties with bacterial wilt, it is essential to detect and manage cucumber bugs as soon as possible. Check for adult beetles in your vine harvests twice or thrice a week at the beginning of the season, and once a week after that. It’s important to keep an eye on the perimeters of vine-growing regions. Cucumber beetles like to hang around in this spot. 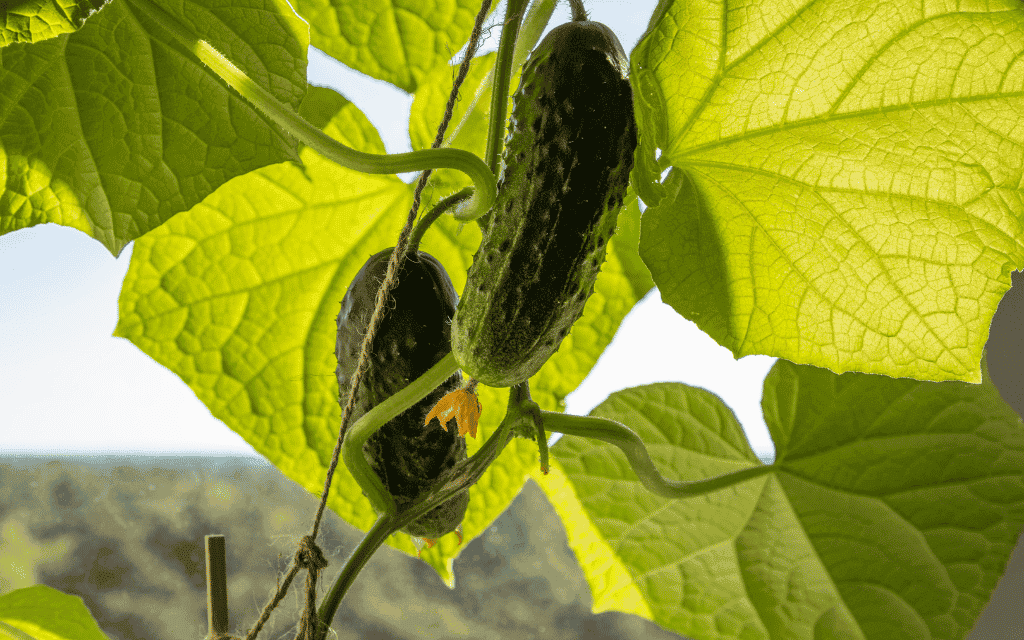 Delaying a cucumber beetle infestation can be accomplished by crop rotation, namely the substitution of grain, tomato, or non-host cover crops for susceptible vine crops. If you’re cultivating vine crops, you could also want to plant blue Hubbard squash along the borders. S quash may be used as a “trap crop” to catch the pesty cucumber beetle, as it is favored by the insect. Cucumber beetle control using trap plants is essential. If not contained, they will likely spread to neighboring vine fields.

20 Natural Ways to Fight Them

Until late in the season

Don’t wait until April to start tilling. Till up your garden when the weather becomes colder but before the ground freezes. This technique will lower next year’s cucumber bug population by exposing cucumber beetles that have burrowed underground for the winter to the extreme cold they were attempting to avoid. 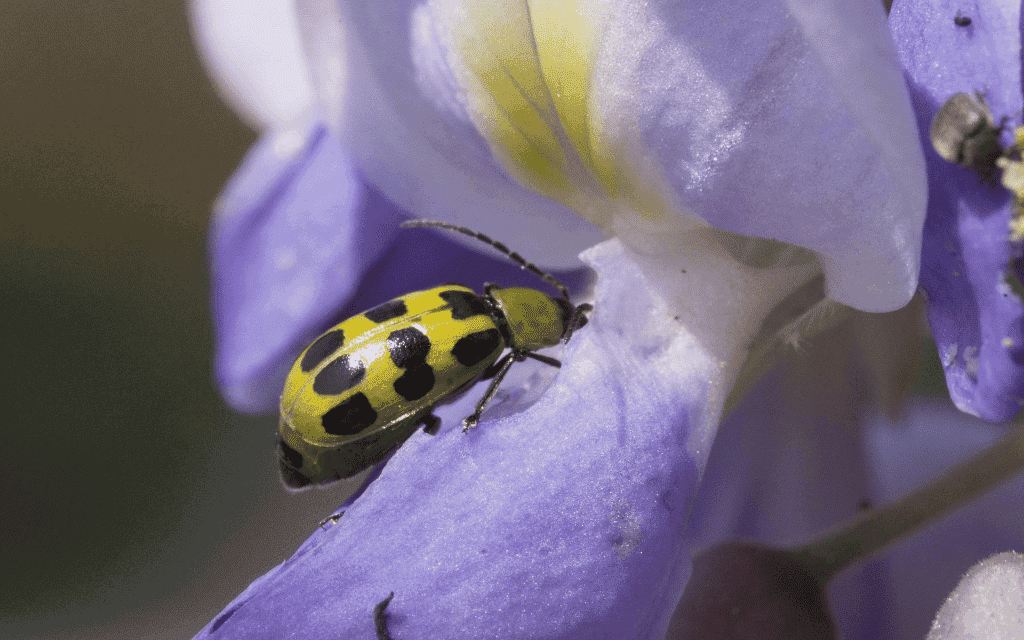 Crop Rotation is especially true for those who have extensive gardens or several garden sites. If you move your cucumbers from year to year, the cucumber beetles from the previous season will have to travel if they want to eat their favorite meal. It works exceptionally well if there are impediments between the old and new locations, like bushes or plants that they won’t eat. This method can give your seedlings some time before exposing them to disease and chewing, keeping them safe at their most susceptible stage. 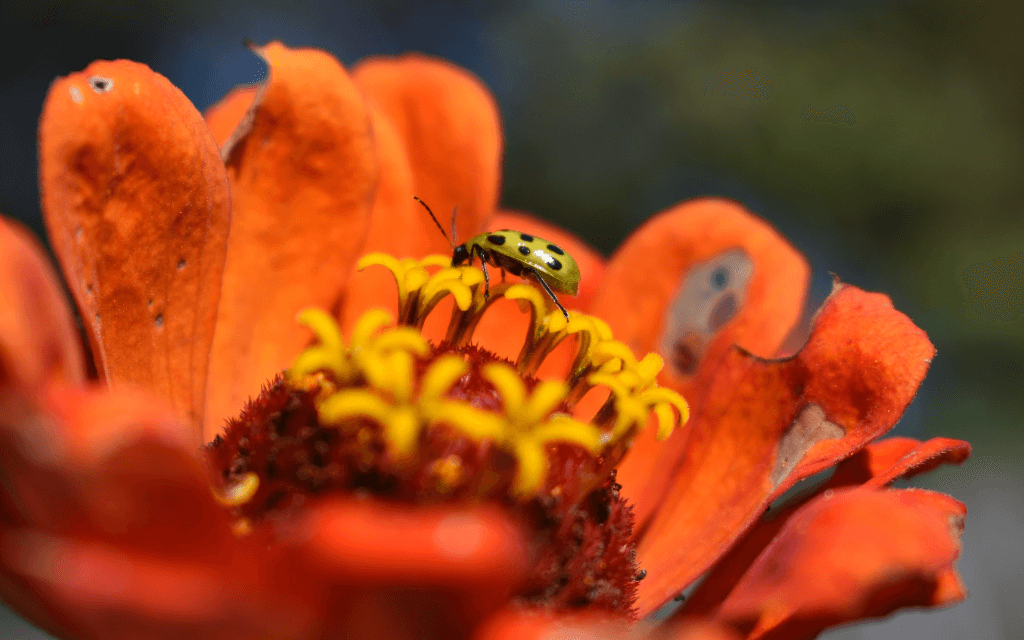 There’s some debate over whether onions and garlic repel Cucumber Beetles; Although some people swear that these vegetables will keep cucumbers beetles out of their gardens, there are others who claim they’re ineffective at repelling Cuts. Try it for yourself!

Make use of transplants.

You may extend this reasoning by using transplants rather than putting seeds directly in the ground. Seedlings are highly susceptible to the bacterial wilt illness carried by cucumber beetles. Unfortunately, there isn’t much that can be done to save them after they’ve contracted the illness. It may be preferable to sow your seeds in a greenhouse or raised surface rather than expose them to the elements. Then, move them to the ground when they’re a little bigger and better capable of withstanding some injury. 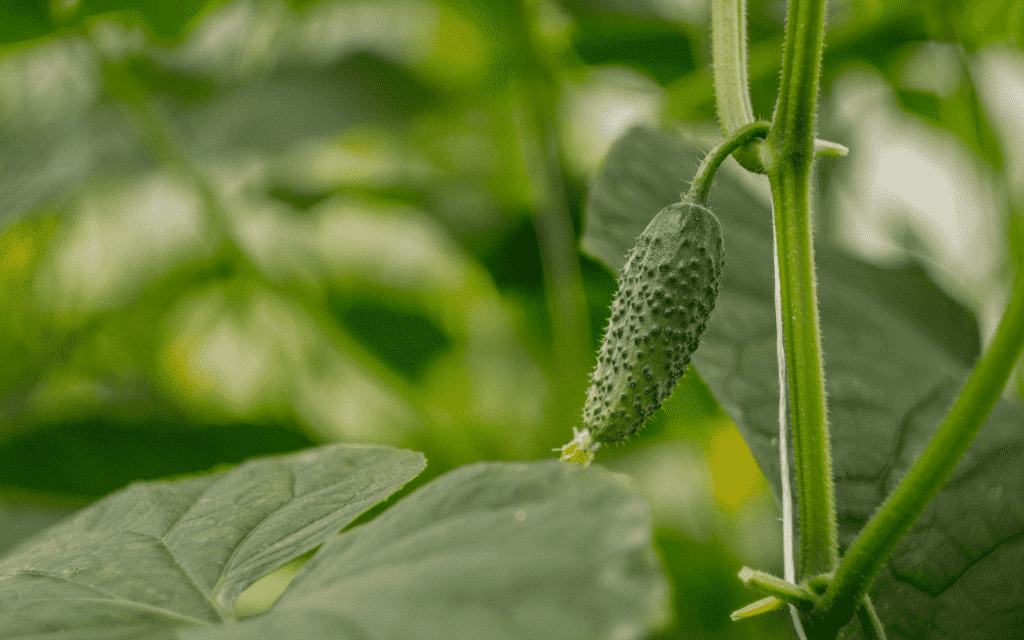 Plant late in the season

Consider giving the insects the benefit of the doubt and delaying planting your cucurbits a little longer. Then, with any hope, the previous season’s beetles will realize they need to leave your garden if they want to find food.

Choose plant types that aren’t as attractive to cucumber beetles or less susceptible to wilt disease. Please see the suggestions below. 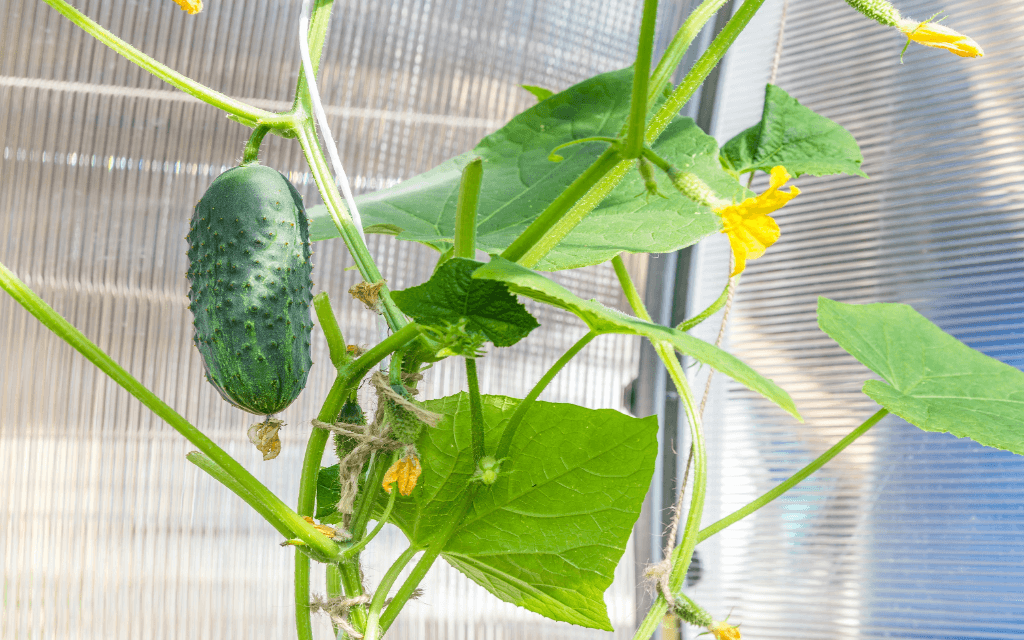 Cucumbers Beetles aren’t fond of fennel so planting some near Cukand other susceptible vegetables helps reduce the risk of infestation by these pests. Fennels’ flowers attract beneficial insects like parasitic wasps that hunt for harmful Cukes Beetles, Cucumbers, and other harmful pests. It also releases a chemical that repels Cucumber beetles and their odor! So place some fennel near Cukand watch your Cuke plants thrive over time!

Planting basil nearby can keep cukes beetles away because it releases chemicals that Cucumber Beetles find unappealing – this is why Cukes beetles tend to avoid basil! Basil also attracts beneficial insects like hoverflies which prey on Cuke larvae and eggs, so growing some in your backyard can help keep these pests at bay.

Planting dill nearby can help reduce the risk of infestation by Cukbecause this flower attracts beneficial insects like ladybugs, parasitic wasps, and hoverflies who feed off these harmful pests. Dill’s flowers are a favorite for bees, so you’ll see more pollination once you plant some here too! Grow some in your garden or backyard to repel Cukes Beetles over time. 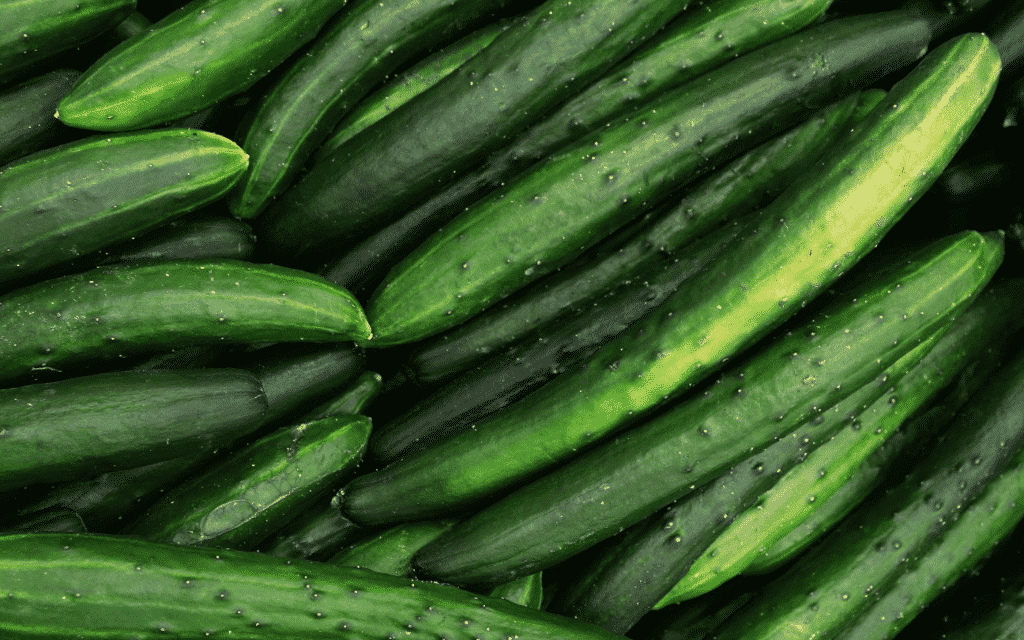 Place clover on top of the mulch to keep Cucumbers Beetles from coming into contact with the Cucumbers.

Make use of row covers.

If you decide to plant seeds directly in the ground, cover your plants with row covers until they bloom. Make sure the soil extends a bit past the seal to prevent adult beetles from entering. Remove the coverings as soon as you see the first flower. Otherwise, they will prevent adequate pollination.

Because cucumber beetles like to gather along the margins of gardens rather than in the center, planting some diversion crops around the boundaries of your vegetative operation may be worthwhile. Just keep an eye on the population, but it should be simpler to reach and handle them before they set their eyes to the plants you’ve planted for your personal use. 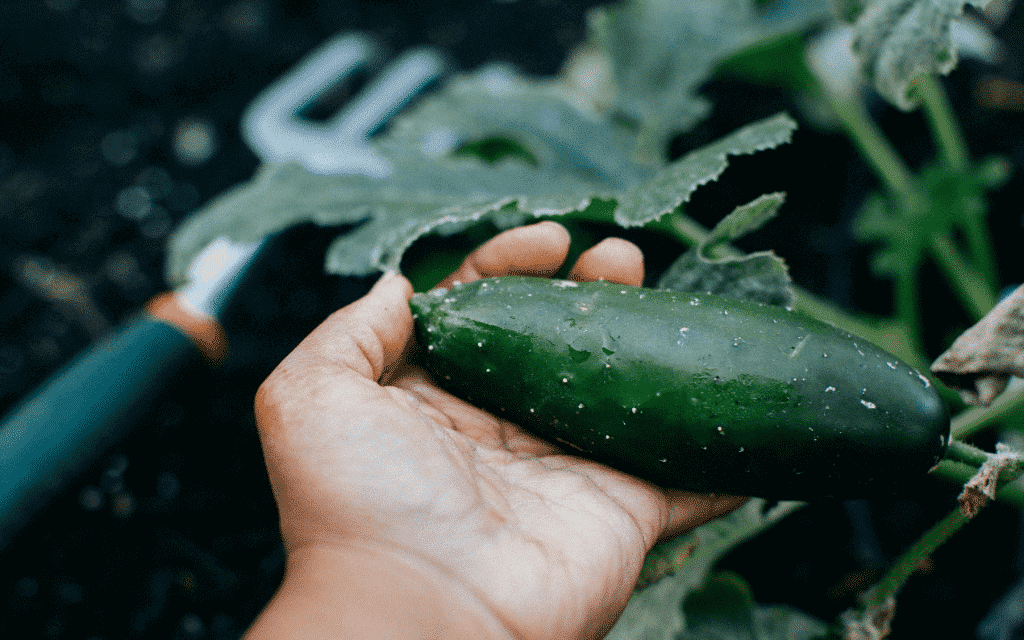 Spread a layer of straw or organic mulch on the ground.

Straw mulch (free of weed seeds!) can aid in the control of cucumber beetles by providing cover for their natural predators, wolf spiders. Other non-pest food for the spiders, such as springtails, will be kept there as well. Organic mulch operates similarly, but on a smaller scale: it fosters a more diversified population of microorganisms in the soil; this will help plants naturally resist insects.

Knock Them Off or Shake Them

Adult cucumber beetles may be quickly dealt with by gently shaking or knocking them into a mix of water, detergent, or saltwater. And they don’t have to perish in vain because the trapped animals may be composted! 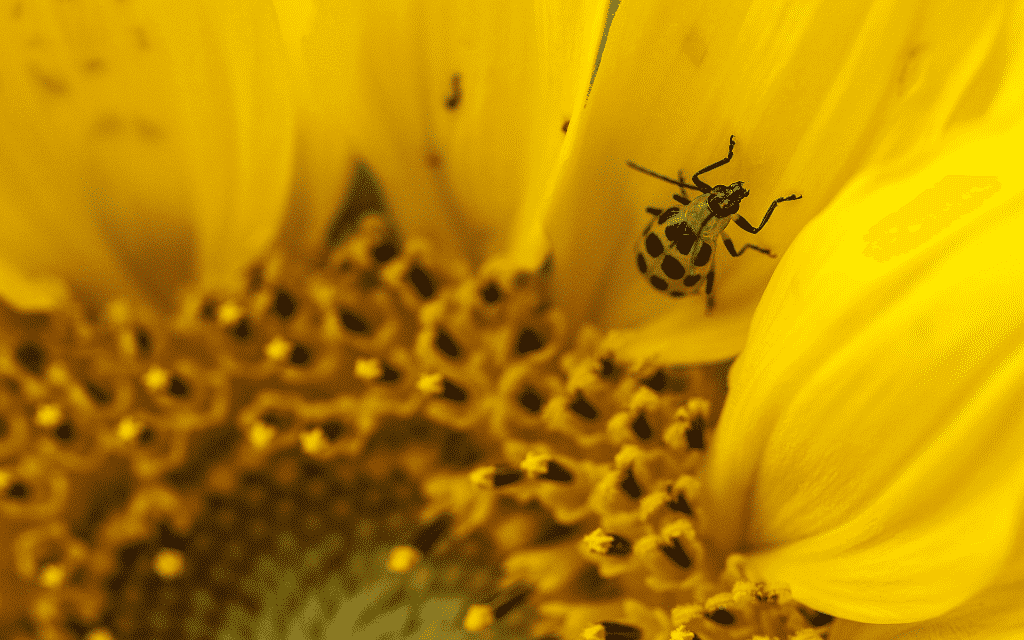 Planting nasturtiums near Cucumber plants can help control cucumbers beetles; they release a chemical (similar to Pyrethrum) that repels harmful insects like Cucumber Beetles. In addition, it’s non-toxic for humans and mammals, so you don’t need to worry about eating Cukes with this flower planted next door. Nasturtiums also attract hoverflies – one type of insect that preys on cukes beetle larvae.

Use Yellow Sticky Traps as a tenth option.

Yellow sticky traps are another simple technique to control cucumber beetle populations in your garden. Like so many other insects, Cucumber beetles can’t resist the brilliant color, and once they’ve gotten hooked, they’re easy to get rid of without the use of chemical pesticides. While there are lots of commercial choices, making your sticky pest trap is inexpensive and straightforward. However, be aware that some traps can also catch beneficial insects, so they may not be appropriate for your overall plan.

Cucumber beetles are tough to catch with only your hands, but if you put on a pair of yellow gloves and treat them with Vaseline, you’ll be OK. These pesky insects travel more slowly in lower temperatures, this approach and a few others that entail manually removing the beetles from your plants should be used first thing in the morning.

Introduce Predators and Pathogens from Nature

Bring in some reinforcements and delegate the nasty task to them. Both wolf spiders and ground beetles eat the pest in question. Furthermore, even if the wolf spiders do not intend to consume the cucumber beetles, their very presence will cause them to avoid the area and feed less. Fungal infections and nematodes are also commonly accessible biopesticides that can inhibit rootworm activity (cucumber beetle larvae). 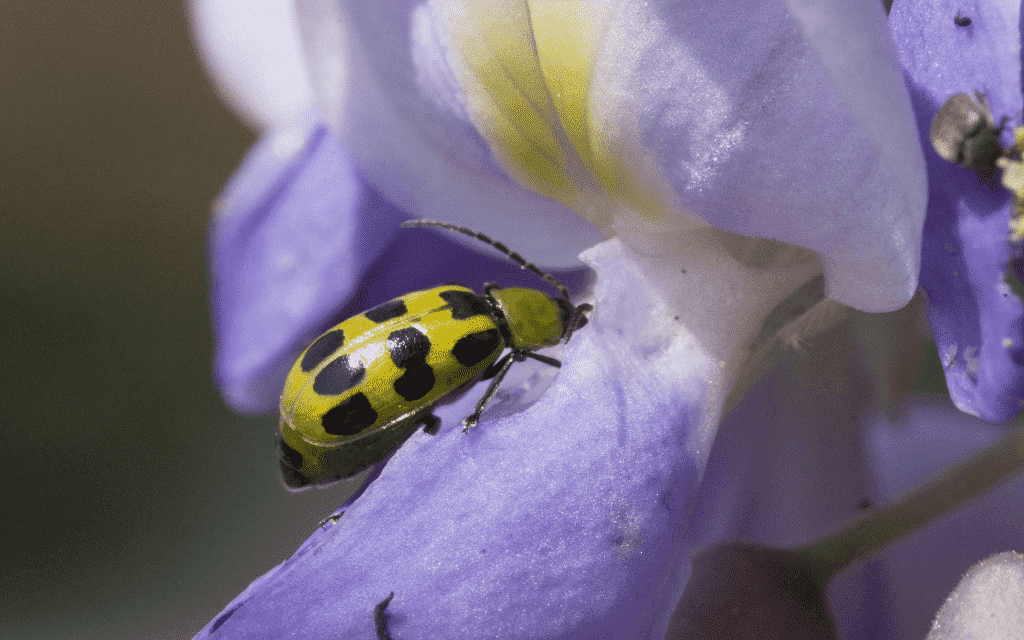 Planting marigolds next door can help repel Cukes Beetles as they release Pyrethrum into their surroundings, but it’s toxic when mixed with soap so ensure you don’t use them together, or you may harm yourself. Instead!

Marigolds are natural enemies of Cucumbers beetles because the former releases an odor that drives off harmful pests while attracting predators like ladybugs who prey on Cuke eggs and larvae. Try growing some around Cucumber plants to keep Cukes beetles away!

Planting mints plants next to Cucumber plants can keep cucumbers beetles away due to their strong odor that deters insects from feeding on them. Mint likes wet conditions, but you must ensure it doesn’t spread throughout your Cuke plant as it can cause root rot.
Use a vacuum to suffocate them. 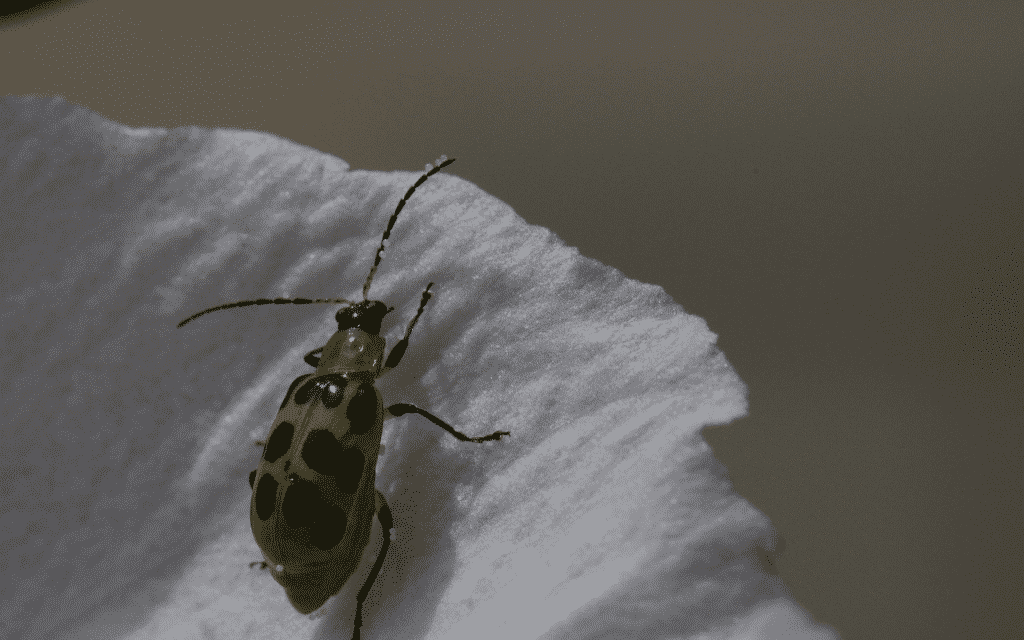 That’s right, your portable vacuum isn’t only for cleaning vehicle seats and carpets; it can also be used to get rid of pests from your plants before they cause too much harm. Just make sure to empty the bag away from the garden to prevent surviving insects from returning for a second round.

What is a Crayfish Mound and Why Do We Need to Know About Them?

Why succulents turn red? Here’s Why.

Sunburned Cactus: How to Prevent Sunburn and Treating Your Plant